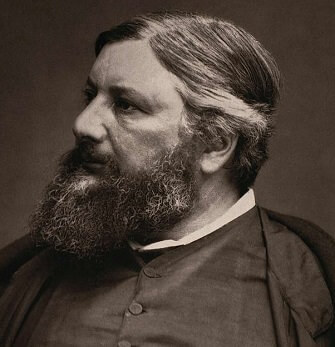 Gustave Courbet was born in 1819 in Ornans, a small town in the heart of the Franche-Comté. He was the eldest of four children, and the only son. They were a close-knit family and prosperous, thanks to his father's extensive estates.

Courbet showed his affection for his family throughout his life. He left behind many portraits of them, sometimes among the figures in his great compositions. He had a similar fondness for his native region which he used as a background in a number of his paintings. At various times in his life, Courbet travelled to the north of France where he was well liked. He lived in Paris, visited Saintonge, the birthplace of his friend Castagnary, went to Normandy with the American painter Whistler, and also to Montpellier at the invitation of Bruyas, his friend and patron. But he always returned to the Franche-Comté.

It was with "an unshakeable self-confidence and indomitable tenacity" (Castagnary) that Courbet launched into a prolific artistic career consisting of four key periods.

At around the age of fourteen, Gustave Courbet was introduced to painting by "père" Baud, a teacher from Ornans and former student of the Neo-Classical painter Gros. In 1837 the young man moved to Besançon, and learned his skills there, at the studio of a follower of the painter David.

Courbet was twenty when he came to Paris to enrol in the law school. He soon turned away from this path, preferring to frequent the studios of Steuben and Suisse. He copied the masters of the Louvre such as Leonardo da Vinci, Peter Paul Rubens, Caravaggio and Titian. In Louis Philippe's "Spanish Gallery" he discovered Diego Velazquez and Zurbarán whom Manet would also admire. Among his fellow French artists, Courbet was fond of Géricault and Eugene Delacroix, two masters of Romanticism who painted episodes of contemporary history on a large scale.

Beyond the influences of the old masters and the Romantics, he was already revealing his ambition to play a major role in the history of art through a personal and sincere style of painting.

In 1848, Courbet, who had exhibited little work at the Salon, finally had some ten paintings accepted. He was noticed, and developed a friendship with the critic Champfleury, and from then on achieved public recognition, confirmed the following year when the State bought After Dinner at Ornans (Lille, Musée des Beaux-Arts). He was awarded the second-class gold medal, which exempted him from the selection procedure until 1857, the year when the rules changed.

However, some of Courbet's other works were greeted with total incomprehension and caused outrage. This was the case in 1849 with The Stone Breakers (later destroyed), then with A Burial at Ornans, at the Salon of 1850-1851. In the second half of the 19th century, academic tradition required that large paintings should only have historic, biblical, mythological or allegorical subjects. Courbet ignored this convention by painting a familiar domestic world on two vast canvases. He considered that contemporary history, even if it was that of ordinary people, merited these large formats. In declaring that "Historical art is in essence contemporary", Courbet expressed his desire to change history painting. The original title of The Burial, The history of a burial at Ornans is symbolic of this point of view.

During this period, Courbet met someone who would have a decisive influence on the rest of his career. Alfred Bruyas (1821-1877), a rich collector originally from Montpellier, bought The Bathers. He went on to become a patron of the artist, who was then able to live independently through his painting. Recognition also came from abroad. By 1854, they were fighting in Berlin and Vienna for the honour of exhibiting Courbet.

Courbet's highest achievement in this period was The Artist's Studio (1854-1855), a true manifesto painting in which Courbet declared his artistic and political choices. Furthermore, Courbet gave this painting, measuring almost four metres by six, the evocative subtitle A real allegory summing up seven years of my artistic and moral life.

The jury at the 1855 Salon accepted more than ten of Courbet's paintings, but refused his Studio because of its size. This decision prompted Courbet to organise a personal exhibition alongside the Universal Exhibition, in a building which he had built at his own expense, and which he called "The Pavilion of Realism".

Young ladies by the Seine (Paris, Petit Palais), exhibited at the 1857 Salon, enabled Courbet to develop a circle of faithful admirers and defenders.

Courbet exhibited regularly at the Salon, and the commissions came flooding in. His abundant production encompassed a variety of subjects: hunting scenes, landscapes, still lifes with flowers. But being provocative by nature, the artist once again caused an uproar with Return from the Conference (1863, now disappeared, probably bought by an indignant person with the aim of destroying it), showing drunken priests in merry conversation on a country road. The painting was refused at the 1863 Salon "as an outrage on religious morality" and he was forbidden to exhibit it even in the Salon des Refusés!

The following year it was Venus and Psyche (now disappeared) which was rejected by the Salon for "indecency". It was during this same period that Courbet painted his provocative work The Origin of the World (1866), a private commission which was to remain hidden from public view for a long time.

When the Universal Exhibition was held in Paris in 1867, Courbet had nine paintings accepted by the Salon. However, this official recognition did not stop him from again organising a personal exhibition in a building constructed on the Place de l'Alma, where the public could see about 140 of his works.

During the summer of 1869, Courbet stayed at Etretat. It was there that he painted The Wave and The cliff at Etretat after the storm. At the 1870 Salon, these two paintings were greeted with a chorus of praise from all sides. Courbet's reputation was thoroughly established from then on.

After the fall of the Second Empire, Courbet was elected President of the Federation of Artists. Courbet stayed in Paris while it was besieged by the Prussian armies, and when many were fleeing the capital. He had followed the events of 1848, and no doubt still remembered his grandfather, who, in 1789, had been a sans-culotte.

In February 1871, his commitment was confirmed: he put himself forward for the legislative elections, but without success. In April 1871, the Executive Committee for the Commune de Paris gave him the task of reopening the galleries in Paris and organising the Salon.

Although elected to the Council of the Commune, Gustave Courbet was not in the National Guard, and therefore did not participate in the fighting. He was arrested on 7th June by the Versaillais government forces and in September was sentenced to six months in prison and fined 500 francs, with 6,850 francs added for legal costs. The sentence was quite lenient compared to the death penalties and deportations given out to other communards...but that was only the beginning of his legal difficulties.

On 12th April 1871, the Commune voted to demolish the Vendôme column on 16th May 1871. It had been erected by Napoleon I, and had become the symbol of the First and Second Empires. This was four days before Courbet had been elected. But the artist made the mistake, in September 1870, of launching a petition asking the government of the National Defence to authorise him to pull down the column.

In 1873, after a new trial, Courbet was held to be responsible. He was ordered to pay the costs of reconstructing the column, a total of 323,091 francs. Courbet lost a great part of his fortune, and moved to Switzerland fearing further imprisonment.

During his exile, the State seized his property, and put his friends and family under surveillance. Things did not improve for the former communard in the politically unstable first years of the Third Republic. Courbet refused to come back to France before a general amnesty had been passed.

In spite of the warm welcome he received in Switzerland, Courbet fell into decline during his exile. He began drinking heavily, and only rarely did he produce works worthy of his talent. Problems with money and legal proceedings became an obsession. He died on 31st December 1877 at Tour-de-Peilz, a few days after the contents of his Paris studio had been dispersed at a public sale.

"Look at the shadows in the snow, Courbet said to me, look how blue they are... Those who try to recreate snow at home don't know this." This comment by the painter, related by Castagnary, encouraging painters to go to the subject, opened the way for the Impressionists' experiments on coloured shadows.

Ses His landscapes were particularly admired by Cézanne: "His greatest contribution," he said of Courbet was, "the introduction into 19th century painting of nature's lyricism: the smell of wet leaves, the mossy rocks in the forest [...]. And snow, he painted snow like nobody else!" During the 1860s, Paul Cezanne took up Courbet's technique of painting with a palette knife, as well as his dark colours and layers of thick paint.

Edouard Manet did not hide his debt to Courbet. Like his elder, Manet also attracted scandal and sarcasm. Lunch on the lawn was refused at the 1863 Salon and then booed at the Salon des Refusés. Public animosity at the 1865 Salon focused on Olympia, the provocative "odalisque with a yellow stomach". In his desire to free himself from academic rules, Manet was following in Courbet's footsteps.

In his Lunch on the lawn (1866), Claude Monet put in a large, portly fellow who looks like Courbet. Courbet actually visited the young artist who was finishing the painting in the studio he shared with Bazille.

Renoir (1841-1919) was also influenced by Courbet in his early career, before taking his own direction, and Courbet's nudes had a lasting influence on him.

A Burial at Ornans

Man with a Pipe

Fox in the Snow